Hunningham is a village in the Leam Valley, just over three miles northeast of Leamington Spa in Warwickshire, the county where William Shakespeare was born in 1564.

The river Leam – which stands on Hellidon Hill in Northamptonshire, which then flows through rural Warwickshire, including the city of Leamington Spa – forms the village boundary between north and west. The Fosse Way crosses the center of the village diagonally and is a perfectly paved road here. 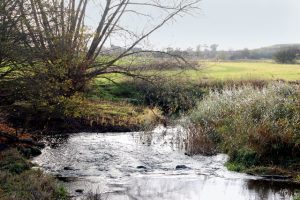 The southeast boundary of Hunningham is formed by the Itchen River, a tributary of the Leam. The geology of the village is clayey, with gravel subsoil.

Hunningham has two bridges of historical importance. The first bridge, of medieval origin, on the Leam river, is in rusticated sandstone. It is formed by three semicircular arches with drinking water crossing the river, two other semicircular arches of alluvial waters are present on the western shore. The parapet is simple, with two pairs of shelters widened out of the roadway on each side in the docks of the sewage.

The second bridge is road on the railway line, built in 1849-1850. It was designed by W.T. Doyne, while the iron work was done by Messrs. Smith, Smith and Jarnes of Leamington. The lattice beams in wrought iron, connected by transverse beams in wrought iron, covered with galvanized corrugated iron, contain concrete and metal roadway. The bridge has a slight curvature. After construction, the bridge was reinforced under the center by four reticular columns with horizontal reticular beams and diagonal braces. The structure was built on the Rugby-Leamington line, now in disuse.

Hunningham’s historic buildings include the mediaeval church of St. Margaret, located on the east bank of the Itchen River, north of the village. It is a church composed of a choir, nave, north nave, sacristy, south porch and a wooden bell on the west tympanum. It dates back to the last part of the thirteenth century, when it consisted of a nave and a presbytery, and appears to have been repaired in the late fourteenth century and redone in the late sixteenth century; in modern times a north corridor, a sacristy and a south portico were added. All roofs are covered with tiles.

The presbytery, with the exception of the parts of the north and south walls adjacent to the nave, has been completely rebuilt with a light colored sandstone ashlar, while the old portions were of red sandstone that flowed between the rubble. The end is against the corner buttresses and is illuminated by a simple tracery window of two pointed lights with a pointed arch. On the south-western exterior side there is a rectangular window on the lower side of two diverged orders, and a modern central buttress that divides the ancient walls from the modern one.

The south wall of the nave has three windows with two trefoil lights with perforations under square heads, all modern but perhaps copies of the previously existing 14th century windows. Between the last two there is a four-pointed door, with a single opening, covered by a modern wooden porch. The west gable of the nave is the most interesting and unaltered part built and is built with rubble of red sandstone with rusticated dressings. In the center there is a protrusion similar to a buttress showing the apex of the tympanum, where it is exposed to the elements. Contains a long beveled hand with simple label stamping. On the top of the tympanum there is a small square bell with a bell-shaped edge for two bells, with a pyramid roof ending in a weather vane representing a rooster. Between this and the corner buttress in the southwest corner there is a massive buttress in four altered phases built in colored sandstone with a molded plinth, probably part of the 14th century repairs.

Observation following the removal of two sections of pews and raised flooring over the south half of the nave revealed brick, dwarf supporting walls. The joists of the eastern section were oak, original, and probably contemporary with the late 19th century, black and red tiled passages between the pews. Those in the western section were soft wood suggesting that this section had been replaced previously. The depth of the voids below the pew floors suggested that the original solid floor levels had been dug out to a depth of 0.4 m. when the tile passages and pews were put in.

Among the vicars of Hunningham was George Leigh Cooke (1779-1853). George Leigh Cooke was the son of Samuel Cooke, from Bookham in Surrey, he was baptized on 12 September 1779. Cooke matriculated at the University of Oxford as a member of Balliol College on 26 January 1797, at the age of 17, and became a scholar of Corpus Christi College in the same year. He was elected to a fellowship of Corpus Christi in 1800, the year in which he obtained his Bachelor of Arts degree, and retained this position until 1815, when he resigned in order to marry. He took his Master of Arts degree in 1804 and his Bachelor of Divinity degree in 1812. He was appointed Sedleian Professor of Natural Philosophy in 1810, retaining this post until 1853.

George Leigh Cooke he was also Keeper of the Archives of the university between 1818 and 1826. In 1820 he was appointed vicar of Hunningham, of Cubbington and vicar of Wick Rissington in Gloucestershire. He was regarded one of the main figures of the Literary Dining Club for Oxford academics. He died on 29 March 1853 at Cubbington. Hunningham Cricket Club is constantly looking for new players of all ages and abilities and encourages anyone to try their hand in the splendid sport of cricket.